This is not a complete list of everyone interred at Mt Olive, however, it  does represent the Society's current level of knowledge based on local, State, and National records.

We will update these Records as research efforts expand.
​
Society Members and visitors can access the Master Records Files at the link below.

Download File
Finding Your Way Around Mt Olive
The Mt Olive Site Plan below will provide you a general orientation to the Cemetery's boundaries, and road networks. The Cemetery has been divided into 8 Zones.  These Zones assist the Society and visitors in locating graves and headstones.
The Mt Olive Cemetery Records Master Files identifies the location of each resident using this Zoning convention. 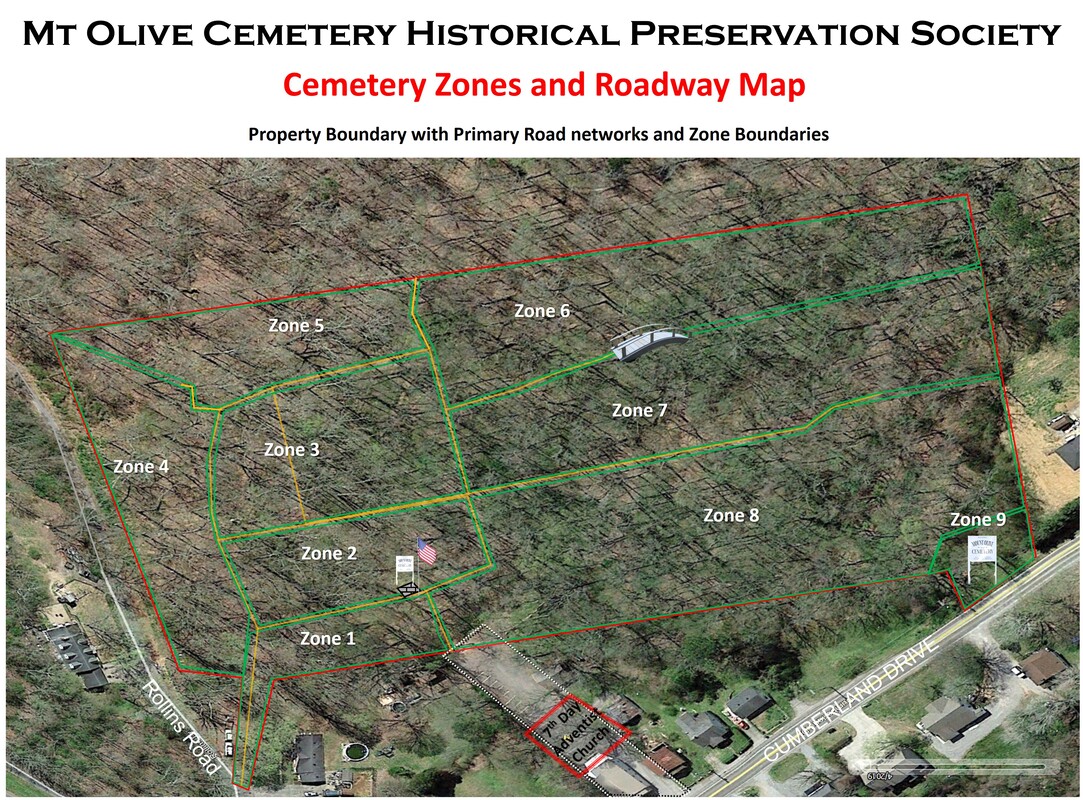 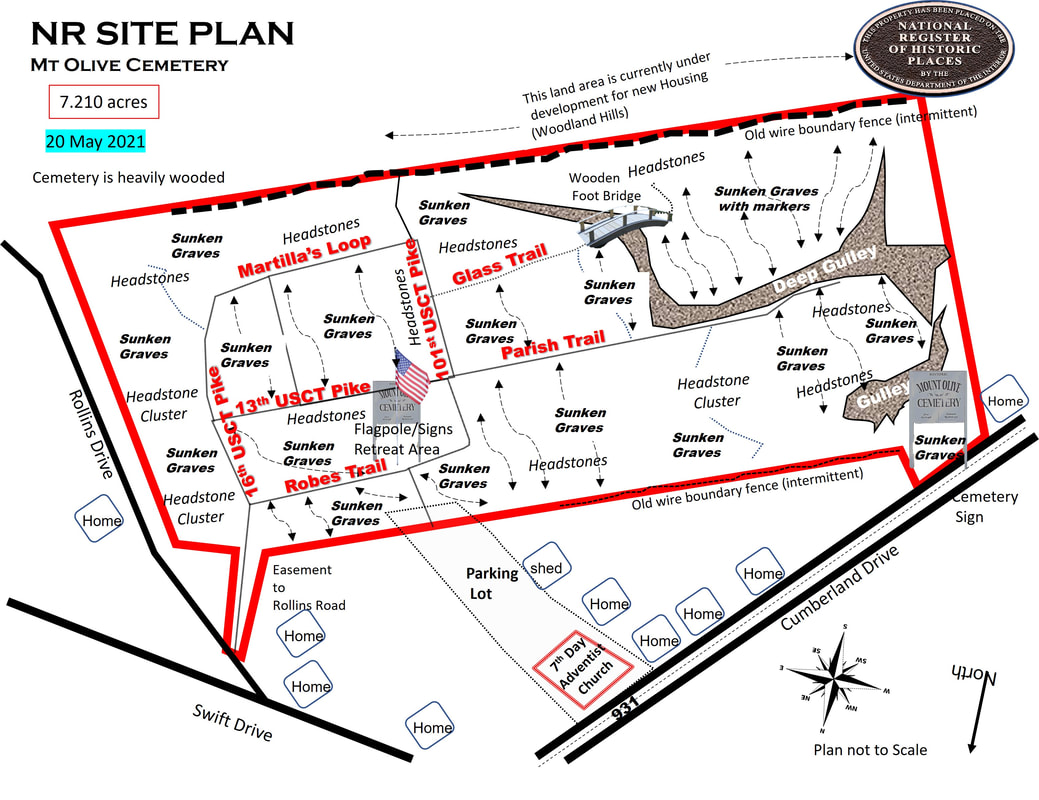 Historical Obituaries
The attached file provides a glimpse into our past.  Here you will find a collection of obituaries from Clarksville's The Leaf Chronicle and The Nashville Globe.  The Society thanks its member Mrs. Brenda Harper for her research on this project.

Remembrance of the Month

In support of our Mission Statement, each month the Society reflects on the life of a permanent resident of the Cemetery.  These Biographies provide a unique insight on the lives, service and sacrifices of those interred at Mt Olive.

We hope these Biographies provide an opportunity for our community to reconnect with our Nation's history and help the Society to celebrate and honor our fellow citizens' lives.
​
Biographies are published by the Society's Historian, Phyllis Smith

Download File
Remembrance of the Month (October 2022)
Wiley Rogers Biography
Wiley Rogers was born in 1877 a possible product of Andrew Roger’s second marriage to Susan Johnson. Andrew Rogers initially married Mary Jane Poston in November 14, 1867. The 1870 Montgomery County census listed the family in District 12 which includes the City of Clarksville. Andrew was working as a Mill Hand and had a personal estate of $100. Two children were listed: Reuben, aged 1 and Louisa, aged 4 months. On May 8, 1871 Andrew bought a city lot on St John Street from Z. M. Taylor for $207.50. Andrew bought a second lot next to the first lot from Taylor on November 20, 1874 for his wife and paid $125. Between 1874 and 1879 Mary Jane Poston died because on November 20, 1879 Andrew married Susan Johnson.
The family was listed in the 1880 census as living between College and Marian and Spring and First Street. Andrew was working as a cooper and six children are listed in the household: Ness, aged 12; Lou, aged 10; Ben, aged 8; Andrew Jr., aged 6; Willie (or Wiley), aged 4; and Frank, aged 3. Unless Andrew “took up” with Susan before they were married, all these children were Mary Jane Roger’s prodigy. Later in legal documents, Susan will claim Wiley as her son.

Andrew Rogers probably died in 1888 because that was the year his will was probated. He left the homestead to Susan and upon her death, to the children to share and share alike. One proviso was “if before that time any of the children named shall so conduct himself or herself as to bring disgrace upon the family then in that event, I direct that such one are entitled to only ½ of his or her share, the balance to be divided among the others.” This directive might indicate that Andrew was aware of problems with some members of his family.

On September 26, 1892 Wiley Rogers bought a lot on Baseball Hill[1]. On April 12, 1894 Wiley took out a marriage license to marry Ellen Ray. He had to pay a bond to get this document. It is doubtful that the marriage took place. First, the Certification of Matrimony section was never filled out. Second, there is no other evidence of marriage in any other document. Wiley’s brother Benjamin Franklin Rogers married Carrie Bailey on June 20, 1894.  Susan Rogers deeded a house on 11th Street to Wiley out of the love she had for her son. She made the transfer depended on Wiley paying the mortgage and allowing Amanda Conrad to live there for life.

Sometime in the spring of 1896, Wiley moved to Louisville, Kentucky. That summer he was employed by Mrs. John McComb as a cook. He was a good employee until February 13, 1897 when he deliberately tried to burn her house down. He prepared breakfast and did his morning chores as usual, but then took coal oil and poured it on excelsior[2] in the basement and all over the furnishings in an upstairs room and set it on fire. While the fire department fought the flames, Wiley laughed heartily. The Courier-Journal reported that his mind had become deranged over love and religion. The authorities in Louisville determined Wiley was of unsound mind and that he was from Clarksville and had property there so they put him on a train and sent him to Clarksville. He went back to Louisville at the first opportunity and Louisville sent him back home again.

On February 19, 1897 Wiley’s brother, Andrew Jr., was arrested for lunacy. He was wandering along Greenwood Avenue only half clad and scaring the women there. This is the last record currently found on Andrew Jr. It is possible that he was committed.

On June 14, 1898 Susan Rogers was arrested.  She was preaching and swearing in the Ninth Ward and was fined $20. They decided she was of unsound mind and were going to turn her over to the county for proper care. On March 1, 1899 the Sheriff was ordered by the County Court to empanel a jury to determine her sanity. This jury met, heard evidence and on March 6, 1899 judged Susan to be of unsound mind and recommended she be sent to the poor house.

The 1900 census listed Benjamin and Carrie living at 114 St John St which was probably the Andrew Rogers homestead. Benjamin was working as an upholsterer. Three children were listed in the household: Laurine, aged 5; Lillie, aged 2; and Webster, aged 8 months. Susan Rogers, now aged 60 and Wiley, aged 23 completed the household. Wiley was working as a carpenter.

On April 15, 1910 Ben, as executor of Andrew Roger’s estate, petitioned to sell the plot of land Andrew bought for his first wife. At this point only 4 of Andrew Rogers children were living: Ben, Wiley, Eubay (living in St Louis) and Frank (living in Chicago). The land sold for $52 with costs of the sale at $13. This meant each of the siblings received $9.75 which in today’s money would equal $305.85.

On January 29, 1918 Wiley Rogers was found dead on the floor of the 11th Street house Susan Rogers had deeded to him. Apparently, sometime after the 1910 census, he moved from his brother’s house to live on his own. He was found by his cousin Annie Moore who was probably taking care of him. A coroner’s jury determined he died of natural causes. He was buried in Mt Olive on January 30, 1918.

Ben became the administrator of Wiley’s estate and on February 20, 1918 petitioned the county court to sell Wiley’s 11th Street house and the lot on Baseball Hill. He had sold Wiley’s household goods for $26.40 and presented an estate bill to the court of $141.54. When the land went up for auction, Ben bought the 11th Street property for $230 and the lot on Baseball Hill for $22. After paying the estate bill, each of the remaining siblings received $34.21 which in today’s dollars would equal $675.16.

At this time, it is unknown when Andrew, Susan, or Andrew Jr died or where they were buried. Wiley’s Roger’s estate did not buy a headstone to mark his grave.

[3] Probably near the current bridge over the Red River on New Providence Boulevard.

[4] Valleybrook Park on Crossland Avenue is in this area.

United States Colored Troops (USCT) Tribute
The drawing above was made by one of the officers of Company G, USCT, named Campbell.
Campbell kept a diary and was quite an artist.
Society member Jill Hasting identified the house from the drawing as first built by Robert West Humphries and later became known as the Pettus House.  Pettus Park and a parking lot across the street from the park are two possibilities for the site of the house.  The house no longer exists.
This home site was in the vicinity of what is now known as APSU's Dunn Center
PVT Isaac Fields
The grave site of PVT Isaac Fields was discovered during a Preservation and Restoration Project conducted in July 2017.  Up until this time, local records made no mention of his burial at Mt Olive.

Private Fields' grave site and head stone were completely covered by a rich bed of perennial vines that blanket much of the cemetery.  It was the hard work and persistence of  a regular volunteer, CW4 (Retired US Army) Scott Loose, that made this discovery possible.  We are grateful for his commitment to our mission and for his untiring devotion to seeing the restoration of the cemetery completed.

It's unknown just how long it had been since America heard the words "Private Isaac Fields" uttered by a fellow citizen and Army veteran.  But on that day of discovery in July, when his name was called-out by Chief Loose, it was truly  a moment of celebration for the Society and indeed our nation.
Rest in Peace Isaac Fields

The most recent photo of Private Fields' gravesite (below) was taken on December 17, 2021, where he and the other 31 veterans interred at Mt Olive Cemetery were honored and remembered with the laying of wreaths, as part of National Wreaths Across America Day, which has the mission of remembering America's fallen heroes, honoring those who serve, and teaching children about the value of freedom.
Powered by